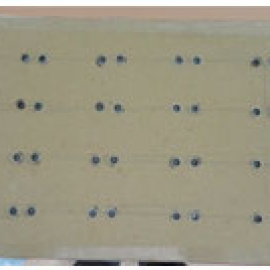 visually challenged people are one among the dependant population in the society who need an extended help from the general public for every normal activity for others such as crossing the roads, boarding the buses and in general realization of the obstacle which is in front of them. this project mainly focuses on providing light for the blind people and relieving them from the dark world by providing them vision using high frequency ultrasonic sound waves. ultrasonic sound waves which are basically high frequency waves and are beyond the range of hearing capability of human beings. these sound waves are used by mammals such as bats and whales to detect the presence of obstacles in front of them. the sound waves which are being sent by these mammals are being reflected back from the obstacle thereby ensuring its presence. this process is known as echolocation. the natural phenomenon of echolocation used by the mammals is being practically implemented here for providing vision for the visually impaired. the practical implementation of the natural phenomenon for use by the visually impaired basically consists of a microcontroller with the ultrasonic sensors on the input side and electrodes on the output side. obstacle once sensed by the grid of ultrasonic sensor gives input to the microcontroller as an image pattern which in turn gives the desired voltage level to the grid of electrodes correspondingly which are on the output end. the electrodes which are placed on the tongue impart vibration (charge) on the tongue nerves which sends the image signals to the visual cortex of the brain. finally the vibration provides a mental picture of the obstacle to the visually impaired person’s and hence perception of vision will be achieved.