Valproic Acid Prevents Progression Of The Diabetic Nephropathy: Elucidation Of Molecular Mechanisms And Proof Of Concept For Promising Therapeutic Usefulness 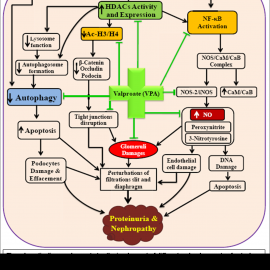 Recent reports emphasize the contribution of histone deacetylases (hdacs) in the pathogenesis of diabetic renal injury and fibrosis. vpa is a first-line drug used for the treatment of epilepsy and migraine as well as established as a hdac inhibitor. the present study was aimed to investigate the anti-fibrotic and renoprotective effects of vpa in diabetic nephropathy (dn). diabetes was induced by single i.p. injection of stz (50 mg/kg), whereas vpa at the doses of 150 and 300 mg/kg/day was administered for 8 consecutive weeks by oral route in sprague dawley rats. blood and urine were collected before animal were sacrificed, while kidneys were dissected after sacrificed. the podocyte and renal injuries were assessed using biochemical markers, histology, podocyte effacement, dna damage and apoptosis as well as protein expression evaluation. further, the fibrosis was assessed by histology, fibrosis specific staining and fibroblast activation by transmission electron microscope, while expression of proteins of interest was evaluated by western blotting and immunohistochemistry. vpa treatment ameliorated the histological alterations as well as fibrosis, and decreased the expression of tgf-β1, ctgf, α-sma, fibronectin, collagen i, cox-2, icam-1 and hdac4/5/7. further, vpa treatment significantly increased histone h3 acetylation and mmp-2 expression. moreover, vpa treatment also improves the plasma and urinary biomarkers of renal function, decreased expression of inos, 3-nitrotyrosine, nf-κb, p-nf-κb, calmodulin, calbindin, and apoptosis and dna damage. the present study clearly established that vpa treatment ameliorates the renal injury and fibrosis in diabetic kidney by preventing the myofibroblast activation and fibrogenesis by hdac inhibition and associated mechanisms, thereby improving the profibrotic and anti-fibrotic proteins balance as well as by facilitating the autophagy and inactivation of nf-κb/inos signaling. further, the present results highlighted the anti-fibrotic and renoprotective effect of vpa as revealed by improving the fine-tuning of the pro- and anti-fibrotic genes at clinically relevant doses. because vpa is a well known clinically used drug, therefore, efforts should be made to translate the present findings into a successful therapeutic intervention for treatment of dn. our findings showed that repositioning of existing drugs (valproic acid) could deliver additional benefits to new indications of disease, improve quality of life as well as better health care in the diabetic individuals.