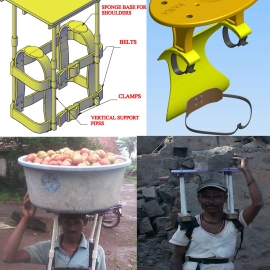 All over the globe from developing to underdeveloped countries, there are over billion of labors involved in the work drudgery either in farm field, construction or industrial site etc. their daily job is to lift, carry and move heavy objects over head. such a tremendous 30-50 kg load over their head not only for one day but for their entire life. according to survey issued by world health organization, over 30% of such labors daily faced physical problems from body pain, back pain to severe injuries and it increases medical expenses but most of them could not afford it. such type of continuous job results in cumulative disorders in early stage of life. but why still those people carrying load over head in this so called modern age?? they donât need cranes or high tech machines; they need a device which helps them to reduce drudgery but still not displaces their job. have come up with a unique innovative ergonomically designed solution to this problem. we have developed a device called vessel desk (vajra) which distributes load over head to the shouldesr. itâs a safety suit like device which has vertical support over shoulders dividing the load in merely equal parts. this relieves the labour and increases his work efficiency, reduces their medical expenses.