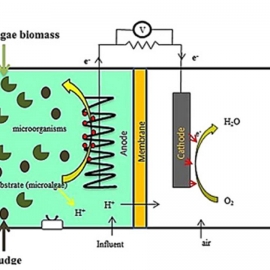 Bioelectrical systems such as microbial fuel cell (mfc) offers a sustainable means to extract the electrons from organic matter in the form of electricity. the use of algae biomass as a substrate in mfcs can provide a cost effective means of electricity generation due to its low energy requirement of cultivation. biocatalyst present in the mfc oxidizes the substrate and electrons are donated to the solid anode. these electrons move through an external circuit towards the cathode and combine with an electron acceptor to generate electricity. various genera of gram negative bacteria present in the anaerobic sludge such as alcaligenes faecalis, pseudomonas aeruginosa and shewanella sp. can degrade algae biomass and transfer electrons to the anode surface. the marine algae chaetoceros can be effectively used both as an electron donor and methanogen inhibitor in mfcs due to its high protein, carbohydrate content and methanogen inhibition properties. methanogens often compete for substrate with electrogens in mfc and hence reduce power produced from this device. methanogenesis is often considered as the greatest challenge in achieving on-field applications of mfcs due to the reduction in coulombic efficiency (ce) since the growth condition of methanogenic archaea is similar to that of electrogenic species. inhibition of growth of methanogens in mfcs can lead to a reduction in energy loss to methanogenesis and the consequent improvement in the ce of the system. long chain saturated fatty acid (sfa), hexadecatrienoic acid present in chaetoceros inhibits the growth of gram positive methanogenic archae via adsorption and disruption of cell membrane. gram negative bacteria are inhibited to a limited extent at higher fatty acid concentrations. performance evaluation of two dual chambered mfcs without any pr-treatment of anodic inoculum was demonstrated and compared using chaetoceros and acetate as substrate. the low cost mfc made with clayware and fed with chaetoceros could produce a maximum operating voltage of 495 mv and sustainable power density (pd) of 12.25 w/m3 after a period of 12 days from start up. a maximum pd of 15.13 w/m3 and ce of 47.25 % could be obtained in mfc fed with chaetoceros; whereas mfc fed with acetate produced a maximum pd of 4.12 w/m3 and a ce of only 16.52%. significant reduction in specific methanogenic activity (60 %) was observed in the mixed anaerobic sludge pre-treated with marine algae. an average total cod, carbohydrate and protein removal efficiency of 73.57 ± 2.1%, 75.77 ± 1.1%, and 43.11% was demonstrated by mfc fed with chaetoceros. this work verifies the concept of using algae biomass as a substrate as well as methanogen inhibitor to enhance the power production from mfc. keywords: algal biomass; microbial fuel cells; methanogen inhibitor; waste to energy; coulombic efficiency.