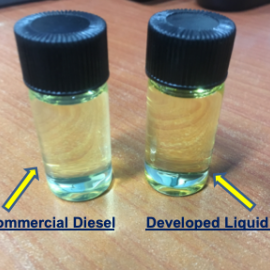 Large amount of waste plastics is being generated because of the accessible properties of the plastics.however, due to lack of efficient end-of-life management in many developing countries; plastics are now posing serious threats to the environment and human health due to its non-biodegradable nature.liquid fuel formation through thermo-catalyticcracking can provide good platform for the energy recovery by making use of dumped plastics. the process involvesdesigning animproved two-stage batch reactor system, an effort for the replacement of petro-diesel compounds which covers the synthesis of highly active heterogeneously modified zeolite supported catalysts for effective catalytic cracking of waste plastic. the developed two-step approach leads to the 100% conversion of waste plastic into value added products comprising 60 to 80% liquids, and 20 to 35% gases at a temperature range of 300-350c. the results suggest that, the carbon chain length was narrowed to c5-c28 when the zeolite catalysts were employed, as well assignificant yield of controlled fraction of paraffins, olefins and aromatics was obtained indicating that the obtained liquids are fuel-like products. the liquid fuel formed is expected to be an effective renewable fuel as supported with the comparable results of gc-ms, 1h and c13 nmr, heating value, proximate analysis, etc. which can be used as an alternative source of fuel for the ic engine operation. however, the usage of the developed catalyst shows the added advantages of reducing the cracking temperature as well as tailoring the selectivity. eventually, it should be noted that the negative impacts of waste plastics could be addressed or minimized by recognizing the fact that waste plastics have a great potential for resource conservation when converted into valuable resource.