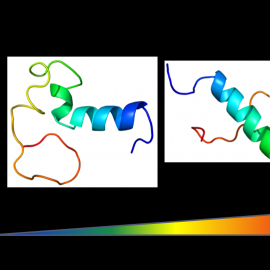 Soil is one of the important element of our ecosystems which has been subjected to degradation due to both natural and man-made causes. native rock weathering, low precipitation, high surface evaporation, wind, irrigation with saline water or disposal of solid waste severely affect the salinity of the soil. the statistical analysis revealed loss of 12 billion dollars of the agricultural crop every year and 3,230,000 km2 irrigated land has been affected globally. to handle these issues on time, soil salinity needs to be monitored routinely. advancements have been made in recent years to explore intrinsically disordered proteins (idps) as biosensors. these are an essential part of proteome and do not possess any well-defined structure but still are functional. these proteins are highly sensitive to temperature and solvent fluctuations. in current work, we have revealed the effect of increasing salt on the structure and stability of cytr dna binding domain (dbd). we observed cytr gradually attains secondary and tertiary structure with increasing salt concentration. cytr displays a graded increase in structure, stability and folding rate on increasing the osmolarity of the solution that mimics the non-specific screening by dna phosphates. the gradual structural acquisition is observed for almost all basic salts like phosphate, sodium chloride, potassium chloride and sodium sulfate . this property of cytr can be exploited to be used as soil salinity sensor.