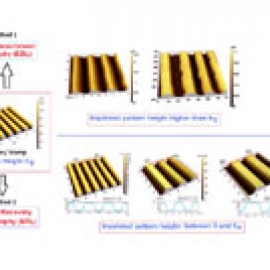 The project deals with the development of innovative techniques which are aimed at the fabrication of large area meso scale patterns on soft polymer films at economical rates, without the need of a new template or stamp for every different pattern. the cost of micro-fabrication of each stamp is high as it requires high end lithographic facilities. hence, simplification and cost reduction is most important for expecting large scale production from any soft lithographic technique. the first technique, termed as elastic recovery lithography (erl) is an innovative soft lithographic method which relies on the physics of controlled stress relaxation in a visco-elastic polymer thin film upon imprinting with a stamp under a transient external force. the proposed method, which is schematically shown in figure 1, can generate patterns with same lateral dimensions and periodicity but different feature height using a single stamp. in quantitative terms, the imprinted feature height (h) can be controlled between 0 and h0, using a stamp with feature height h0. following any conventional soft lithography or imprinting method, fabrication of such a set of structures would have required large number of stamps, each having different feature height. the technique of erl is not limited to any specific class of material and can be used for any polymer that exhibits visco-elasticity, including cross linkable elastomers and linear chain homopolymers.the second method termed as elastic detachment lithography can lead to fabrication of micron and sub-micron scale physical relief structures by imprinting and subsequent detachment of an elastic thin film with a patterned stamp. first a patterned contactor or stamp is brought in conformal contact with a thin purely elastic film. after complete contact has been established, the stamp is then retracted slowly, to detach it from the surface of the film. due to pinning between the stamp and the film, the patterns on the surface of the film formed due to imprinting of it when the stamp came in complete conformal contact with the film does not detach immediately and tend to stretch. these stretched structures are subsequently made permanent by chemical modification of the film surface while the stamp is still in contact with the film.