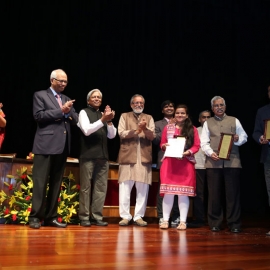 Reading storybooks is a fun activity for almost every kid. a sighted child could recognize his surroundings by using his sense of visual acuity, by reading story books, visualizing the environment, which allows him to make clear observations, but this is not the case with a visually impaired child. they lack far behind sighted children in terms of learning & adapting to new things. they are unable to visualize their surroundings & develop an understanding of their environment. also, there are very limited options available to them in terms of recreational activities even when it is just simply reading a storybook, they are not self-reliant, and i.e. they require assistance. tedkit, an audio tactile story book for visually impaired children helps the visually impaired child to visualize the happenings in the real world and also provides an imaginary view of the original character and happenings all around in the story. our kit includes a ted storybook, a ted stand & a ted android mobile application. ted storybook is basically a storybook with 3d embossed images so that the child can actually feel the characters & happenings in the story & the audio for the story is provided by ted android application. the android application scans the qr code attached on each page of the story book & plays the corresponding audio file. storybook is also having interactive braille questions with toggle switches at the end to make the storybook more interesting for the visually impaired child who perceives this as a fun q & a game. ted stand is a wooden/plastic stand with clips to position the storybook appropriately & groves on the top to hold the android mobile device (camera sensor) in proper position & it has an enclosed bluetooth integrated electronic circuit which is used to control the toggle buttons at the end of the storybook through which a vi child could experience an interactive way of getting answered all the interesting questions related to the story through an android application.also, there are advertisements about the facilities available for the for the visually impaired children at the end of the storybook to spread awareness among the guardians of the children.with the help of tedkit visually impaired children can not only learn things on their own but their fundamental early literary skills can also be enhanced which can have an everlasting impact on their future.