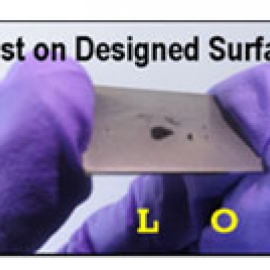 The ability of a surface to clean off its dirt and dust by itself is known as self-cleaning. naturally occurring lotus leaves possess this unusual self-cleaning property. a self-cleaning surface would find multi-billion dollars commercial applications in textiles, exterior architectural coatings, solar panel coatings, water-proof electronic devices, rain-water harvesting and many other fields. unfortunately, most of the explored strategies (to obtain self-cleaning surface) in the literature such as lithography, sublimation, plasma techniques and electrochemical methods suffer from several drawbacks (cost, processability, large-scale fabrication etc.) for their commercialization. on the contrary, our strategy involves a functional molecule, naphthalenediimide derivative, which undergoes self-assembly into two dimensional honeycomb-like architectures in less than a minute time, just by drop casting a solution of dichloromethane. since we use simple molecules, which is solution processable, engenders reduced cost, easy processability and facilitates large-scale fabrication. moreover, these surfaces are chemically inert and durable for long term usage. in addition, we have shown for the first time that fluorescent dyes can also be incorporated into these architectures and by using three primary colors red, green, and blue in appropriate ratios, white-light-emitting as well as any rainbow-colored hydrophobic decorative architectural coatings can be realized. moreover, since naphthalenediimide is a potential n-type organic semiconductor, utilization of suitable p-type semiconductor can in principle also facilitate construction of solar cells. our extensive study also indicate that several other functional molecules can also be incorporated into our design and thereby obtain unprecedented multifunctional properties along with self-cleaning property.