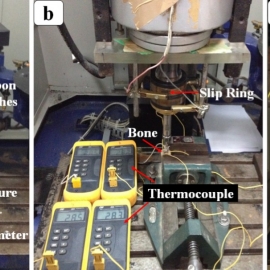 Bone drilling is one of the steps in a typical surgical operation i.e. performed around the world for reconstruction and repair of the fractured bone. during the last decade, various techniques like two step drilling, ultrasonic assisted bone drilling, laser drilling etc. have been introduced to control the level of forces and torque during the bone drilling. thermal necrosis is one of the major problem associated with the bone drilling process in orthopedic/trauma surgical operations. in the present research, rotary ultrasonic bone drilling (rubd) has been successfully attempted to minimize the forces, torque and temperature during bone drilling. the drilling experiments were planned and carried out on porcine bones using design of experiments (response surface methodology). analysis of variance (anova) was carried out to find the effect of process factors such as rotational speed, feed rate, drill diameter and ultrasonic vibrational amplitude on the force and torque. statistical models were developed for the force, torque temperature and its distribution with 95% confidential interval and confirmation experiments have been carried out to validate the models. microcracks developed during drilling process were characterized by scanning electron microscopy (sem). the results revealed that rubd process offered a lower force, torque, temperature and microcracks making it a potential process for bone drilling in orthopaedic surgery. results were also compared with the conventional surgical bone drilling (csbd) process. temperature was recorded and measured by using embedded thermocouple technique at a distance of 0.5 mm, 1.0 mm, 1.5 mm and 2.0 mm from the drill site. statistical model was developed to predict the maximum temperature at the drill tool and bone interface. it was observed that temperature increased with increase in the rotational speed, feed rate and drill diameter and decreased with increase in the vibrational amplitude. this study was also focuses on the investigation of microcracks and pullout strength of cortical-bone screws in drilled holes. it compares conventional surgical bone drilling (csbd) with rotary ultrasonic bone drilling (rubd), a novel approach employing ultrasonic vibration with a diamond-coated hollow tool. both techniques were used to drill holes in porcine bones in an in-vitro study. scanning electron microscopy was used to observe microcracks and surface morphology. the results obtained showed a significant decrease in the number and dimensions of microcracks generated on the inner surface of drilled holes with the rubd process in comparison to csbd. it was also observed that a higher rotational speed and a lower feed rate resulted in lower damage, i.e. fewer microcracks. biomechanical axial pullout strength of a cortical bone screw inserted into a hole drilled with rubd was found to be much higher (55% to 385%) than that for csbd.