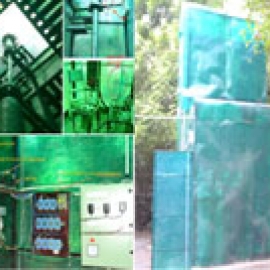 The growth of global energy demand during the 21st century, combined with the necessity to master greenhouse gas emissions, could lead to the introduction of a new and universal energy carrier: hydrogen. direct splitting of water into hydrogen and oxygen is not practical and also energy demanding. this can be accomplished in multitude of ways to reduce the energy demand and by generating the hydrogen and oxygen in separate places. collectively these processes are known as thermochemical hydrogen cycle (tc)s. there are many such thermochemical cycles have been experimentally analyzed in the last 20 years as viable routes. amongst these cycles sulfur-iodine (si cycle) thermochemical cycle originally proposed by general atomic turned out to be the most promising one due to its higher efficiency (~56%). the presen work deals with one of the important step in si cycle, i.e catalytical decomposition of sulfuric acid to sulfur dioxide and oxygen and is the highest energy demand in the sulfur (si) cycle and it shows a large kinetic barrier requires. sulfuric acid being highly corrosive and its endothermic decomposition needs elevated temperatures (>1023 k). catalysts are used to make the reaction conditions favorable by improving the dissociation efficiency and lowering the activation energy barrier for the reaction. sulfuric acid is very corrosive especially during the phase changing condition, development of suitable reactor is utmost important. the present innovation deals with these two problems i.e. i) development of the cost effective, stable catalyst and ii) best corrosive resistive reactor to work with. during the last four years these two objectives were fulfilled and entire process was demonstrated in pilot plant level.