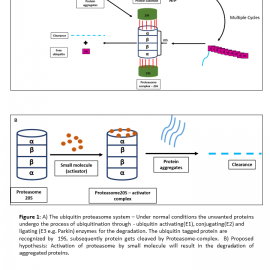 Parkinson’s disease (pd), an age dependent neurodegenerative disorder occupies a significant portion of total disease burden of non communicable diseases in our country. the accumulation of inclusion bodies/aggregation-prone proteins along with the loss of proteostasis eventually leads to death of neurons. proteasome complex is known to be one of the key regulator of proteostasis in all the cells where the damaged and misfolded proteins are degraded. recent studies have reported decreased proteasome function as a primary cause for many neurological diseases including pd. there are fda approved inhibitors of proteasomal activity, however development of proteasome activators is rarely looked at. one of the prime reason behind this is the complexity of human proteasome, limited understanding of the mechanism of activation. hence, in our study we exploited the archaeal proteasome complex through virtual screening and state-of-art molecular simulation techniques to decipher the mechanism of proteasomal activation by the hbyx motif (present in endogenous activators). results from our study showed that the extreme c-terminal residues (tyr & arg) of this motif directly participate in opening the central pore of the archaeal 20s complex. arginine being the charged residue contributes more to the binding energy and tyrosine residue interacts with the n-terminal loop of the each α subunit through a h-bond with the backbone of gly19 (α subunit) side chain of arg20 (α subunit). thus, the dipeptide- tyr-arg is exploited as the initial lead for database screening followed by rigorous docking analysis. this extensive library screening resulted in three activator small molecules, working in both archaeal and human 20s complex. from our study we have successfully characterized the first lead chemical moieties as the potential proteasome activators. hence, our results showed that the structurally simple archaeal 20s complex can serve as the ideal target for structure based drug-designing in order to find activators for the human 20s complex.