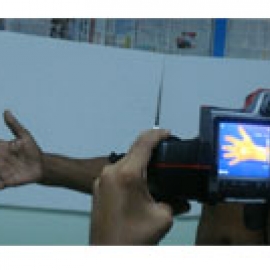 The application of the non-invasive infrared thermography in the diagnosis and prediction of the type 2 diabetes against the bio-marker (hba1c) was studied based on the evidence that insulin has a profound impact on the metabolism; diabetes and the core body temperature and that was measured from the skin surface temperature based on the standard practice of the european academy of thermology. the study subjects n=62 were classified into the control and diabetic as per the diagnostic criteria (hba1c ÃÂ¢ÃÂÃÂ¥ 6.5%) set by the american diabetes association and the world health organization. in the methodology-i, the skin temperature co-efficient obtained from the contra-lateral surface of the diversified body regions were consolidated and the receiver operating characteristic test was used to set the temperature (oc) as the threshold for the diagnosis of diabetes. the palm region indicated the highest overall accuracy of 73% in diagnosing the disease. in the methodology-ii, the blood glucose (hba1c) was estimated from the non-invasive variables based on the design of an optimal regression model and the overall accuracy of 72% was achieved in the validation of the test result. further, among the control group (n=31), the thermography predicted the onset of the disease for n=14 subjects; although, they were diagnosed as either control or pre-diabetic by the standard bio-marker. the test results of the two different methodologies concluded the near similar accuracy; hence, the infrared thermography could be used as the preferred non-invasive marker for the prediction of pre-diabetes, type 2 diabetes and its complications.