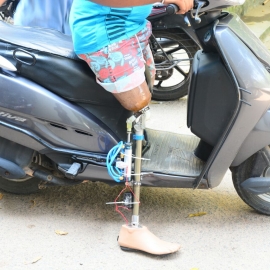 Our project is cost-effective feedback based prosthetic leg for above-knee amputees. currently, the majority of amputees in india depends on low functionality mechanical legs like uni-axial knee, remotion knee, jaipur limb, etc. because the cost of a high functional feedback-based leg is around 70000 dollars. all mechanical prosthesis like uniaxial knee, remotion limb, locks and transfer load to the ground only when a load is acting normal to the ground, when the leg is in a bent position won’t lock and amputee will fall down. also, mechanical legs won’t give any walking assist, it only provided support & drains more energy. we incorporated a proportional solenoid valve controlled pneumatic damping system in a mechanical knee. force sensor at the foot detects the pressure applied by the amputee and adjust the damping resistance at the knee which enables to lock the knee joint at any angle and position correspondingly. so that amputee can transfer the load to the ground even in a bent position of the leg. compressed air inside the pistons absorb shock during the stance phase of walking and provide walking assistance during starting of the swing phase of walking and drains less energy.