One Drug To Cure Them All 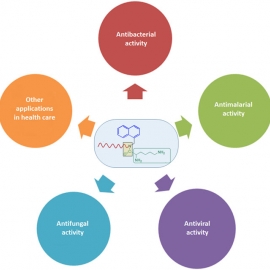 As arsenal of antibiotics dwindle, effort is being focused on development of newer antibiotics e.g. antimicrobial peptides (amps). antimicrobial peptides form the body’s first line of defense against invading pathogens. some of them possess a range of biological activities such as antibacterial activity, antiviral activity, antifungal activity, antimalarial activity and so on. their clinical translation is limited by proteolytic degradation, in-vivo toxicity and high cost of manufacture. synthetic mimics of antimicrobial peptides (smamps) are known to circumvent the problems of amps and some are being developed as antibiotics. in this work, the simplest possible, small molecular mimics of amps have been designed. for the first time, any smamp has been prepared using three simple synthetic steps. the design of the molecules involved an aromatic core, a variable hydrophobic alkyl chain and an l-lysine moiety. these three components were linked together by a tertiary amide linkage. systematic variation of the aromatic core and the long alkyl chain yielded optimal amphiphilicity. these molecules possess antibacterial, antimalarial, antifungal and antiviral activity. they possess activity against a broad spectra of bacteria including multi-drug resistant pathogens. they are not toxic to mammalian at their bactericidal concentrations. upon injection in mice, the compounds demonstrated no adverse effects on major organs like liver and kidney and possess high ld50 values. they also possess antiviral activity and one of the compounds has been shortlisted as a possible drug against ebola. the compounds also possess substantial antimalarial activity and were found to increase survival in mice infected with malarial parasites. against fungi such as candida sp. and cryptococcus sp. they are active at low concentration. they can even be used in release based antimicrobial coatings to develop coatings for medical implants. most importantly these compounds are extremely cheap to prepare and possess immense potential to be developed as cost-effective multi-purpose drugs.