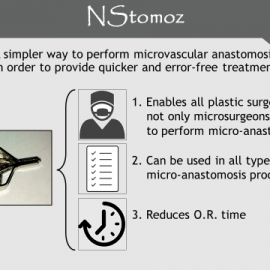 Connecting vascular tissues is a common practice in many fields of surgeries. for the tissue to survive, its donor vessels need to be connected to the corresponding recipient blood vessels. this process is known as vascular anastomosis. vascular anastomosis is carried out in more than 3.5 million procedures worldwide every year, including all bypass surgeries, all aneurysmectomies, all solid organ transplants and various types of microsurgeries. this number is increasing at a phenomenal rate with increase in indications such as road traffic accidents, cancers, and a variety of lifestyle diseases. presented here is a patented anastomotic assist device to enable surgeons of all specialties to perform anastomosis faster, safer and with an easier learning curve. the three key challenges in vascular anastomosis – zero margin for error, steep learning curve, and long procedure time; are addressed by our device (khouri, 1992; patkin, 1977; kilbom, 1990; facs bulletin, 2012). we identified that the root cause of difficulty in vascular anastomosis lies in the limitation of its gold standard device, vascular clamps. application of vascular clamps, while preventing blood from flowing into the field of surgery causes collapse of the blood vessel lumen, thus creating a bottleneck for manipulating and suturing delicate vasculature. our novel technology keeps the lumen open to the surgeon’s view while simultaneously clamping the blood vessel. this greatly de-skills the process by allowing the surgeon to suture with minimal manipulation of the vessel, thereby reducing the possibility of vessel damage and saving pricey ot time lost during manipulation. such de-skilling would no longer call for rigorous training specific to vascular anastomosis, enabling surgeons from all fields to perform vascular surgery with elementary training. this idea was called “revolutionary” by some surgeons during a survey. suturing, the current gold standard for microanastomosis, is a highly efficient procedure if performed correctly (zeebregts et. al, 2002). yet, many innovations around vascular anastomosis have attempted to eliminate it. these concepts have not gained traction in practice as they are expensive, they introduce foreign substances, have limited application and their method of usage drastically differs from the gold standard. our invention has leveraged the efficiency of sutures and eliminated its biggest flaw, in order to create a reusable, sterilizable, easy to use alternative to vascular clamps whose operation is majorly aligned with the standard technique. due to this alignment with current standards, we aim to reduce the effort and time spent by surgeons on mastering the process of anastomosis. all of this is achieved at a price point that is nearly same as the gold standard vascular clamps. the current version of our device is aimed at microvascular surgery, which faces a great deficit of surgeons. india has roughly 2000 microsurgeons that cater to a population of 1.2 billion (isaps global survey, 2014). by reducing the learning curve, we aim to enable more surgeons to perform microvascular anastomosis, so that the procedural burden can be tamed without affecting the quality of care. our technology combines frugality with quality by providing better care to patients with lower occupational hazards to surgeons, thereby generating greater value for all. so far, we have developed various designs and prototypes for the novel device, filed two provisional patent applications and successfully demonstrated the concept through benchtop testing. we are currently developing an improved prototype. we plan to conduct pre-clinical trials and publish the findings.