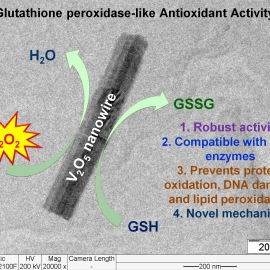 Nanozymes have attracted a lot of attention due to their intriguing properties and robust applications. during our attempts in the investigation of antioxidant nanozymes, we surprisingly noticed that the oxidant material, vanadium pentoxide, shows significant glutathione peroxidase-like antioxidant activity in its nano-form. we found that these nanowires are extremely compatible in working in a cascade of enzymes without affecting them. vanadium pentoxide nanowires also show protective effects in cells and prevent reactive oxygen species-induced damage to dna, proteins and lipids. contrastingly, cells treated with bulk vanadium pentoxide, vanadium pentoxide foam and vanadium ( 5) complexes resulted in generation of reactive oxygen species and cause death. this led us to investigate the chemical mechanism involved in the glutathione peroxidase-like activity. detailed investigation on the mechanism of this interesting phenomenon revealed that the protective effects result due to conservation of the oxidation state of vanadium in ( 5) throughout the catalytic cycle. while the vanadium center in bulk vanadium pentoxide and vanadium complexes undergo redox recycling during the catalysis, generation of reactive oxygen species due to the fenton reaction leads to toxicity. the remarkable change in property from oxidant to antioxidant is due to the quantum size confinement of electrons that results in change in redox potential of a material. based on our findings, we envision that biocompatible vanadium pentoxide nanowires can provide tremendous future therapeutic potential to prevent ageing, cardiac disorders and several neurological conditions, including parkinson’s and alzheimer’s diseases.