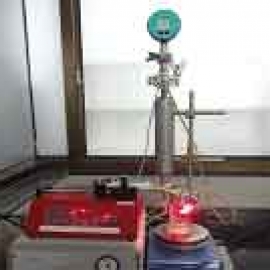 This research aims to develop and investigate a multifunctional implantable system capable of biosensing, drug delivery and magnetic resonance imaging (mri) for continuous monitoring, controlled anti-inflammatory drug delivery and imaging, respectively. a glucose biosensor, diclofenac sodium (diclo) and magnetic nanoparticles (mnp) were used as the biosensor component, anti-inflammatory agent and mri contrast agent, respectively. mnp were synthesized by the co-precipitation technique and loaded with the sensor and drug components into alginate microspheres using a commercial droplet generator. the multifunctional system was then characterized using optical microscopy, sem, tem, vibrating sample magnetometry (vsm) and mri. the final system, comprising the biosensor, drug and mnp (5–15 nm) loaded inside alginate microspheres, was found to be in the size range of 10 & 60 µm. biosensing studies indicated an excellent glucose response curve, with a regression coefficient of 0.974 (0–10 mm of glucose, response time: 4 min). in vitro diclo release shows that mnp loading in alginate microspheres increases the burst release percentage by 11–12% in both 60 and 10 µm particles. however, the duration of release for 85% drug release decreases with mnp loading by 7 and 6 days for 39 the 60 and 10 µm particles, respectively. super-paramagnetism was confirmed by vsm, with 2.09 and 1.368 emu-g-1, respectively for the 60 and 10 µm particles, with no hysteresis. mri showed significant contrast for both sizes. the particles showed an excellent biocompatibility (>80%) for all combinations of formulations.