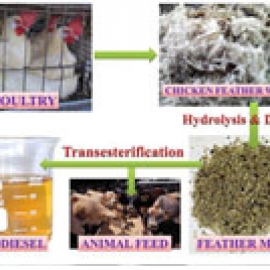 The present modern world results the problems related to the huge amount of poultry waste generated throughout the world due to industrial revolution, over population and urbanisation. the environmental burden due to such wastes is increasing at an alarming rate and thus there is a need for bioremediation. previous treatment methods include land filling. but land filling pose problems of secondary pollutants like landfill leachate, greenhouse gases and odour. the modern treatment methods lead to the production of mosquitocidal toxins .for the production of mosquitocidal toxins we used chicken feather powder (0.5%) for the preparation of bacterial culture media, on which we cultured entomopathogenic bacteria (bacillus spp.) which completely degrades feather waste. feather is composed of over 90% protein, the main component being keratin specially β- keratin and constitutes the most abundant keratinous material in nature. the mosquitocidal toxin is extracted and then assayed by testing on culex larvae. the endotoxins produced are a potent larvicidal agent for mosquito. thus reduces the overall consumption and harmful effect of commercially available mosquito repellents. hence the treatment of feather waste can be envisaged.