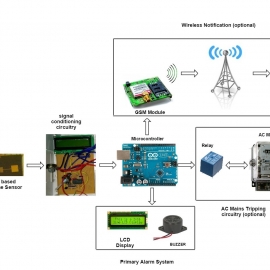 Increase in deaths of lives due to leakage of methane in coal mines or from natural gas pipelines has caused a rising concern. recent incidents, like explosion of natural gas pipeline on june 27, 2014 killing 19 people and wounding scores in nagaram village in east godavari district of andhra pradesh( toi dated aug 7, 2014) or methane gas leak in chhattisgarh’s bhilai steel plant, killing 6 people and injuring 40 people demands the development of a methane sensing module which can detect the leakage efficiently and trigger an alarm or perform a safety operation which can prevent accidental fire as a small spark can trigger an explosion if the methane leakage in the atmosphere is within the explosive limits ( the upper and lower explosive limits being 15% and 5% respectively). further more with the increase in usage of natural gas and biogas in automobiles and household as an alternative for a clean source of energy, detection of methane leakage has become much more relevant and demands for a portable low cost room temperature methane detector. the present project aims exactly at developing this. conventional methane sensors are based on metal oxides which suffer from higher operating temperature and hence draws more power thereby increasing the cost. not only that this also poses a threat of using these sensors in explosive environments. with the discovery of carbon nanotubes by iijima in 1991, a revolution has occurred in the field of sensors and actuators due to the excellent electrical, optical and mechanical properties associated with this material. carbon nanotubes can be structurally conceptualised as a rolled up graphene sheet and they can either be single walled or multiwalled (where the walls are concentrically nested and held together by vander waals force). depending on the chirality of the carbon nanotubes (the direction in which the graphene sheet is rolled up), they can also either be semiconducting or metallic. in carbon nanotubes each carbon atom is a surface atom which is exposed to the chemicals. this high surface to volume ratio alongwith the hollow structure renders it an excellent material for chemical sensor. however methane is practically inert non polar molecule which makes it difficult to detect it at room temperature and hence few sensors are reported till date which detects methane at room temperature. moreover most of these reported sensors are capable of detecting methane at a higher concentration ( more than 1%) with a higher response and recovery times. here we demonstrate a methane sensor comprising of palladium decorated multiwalled carbon nanotubes (mwnts) which can detect 0.1 % methane at room temperature with a quick response time and a sensitivity of 0.8% which is much higher than the reported values. recovery time for the sensor is 20 minutes without the use of any desorption aids like heating, ultra violet light illumination etc. the sensor has been prepared by dropcasting 2 microlitre solution of pd-mwnts dispersed in n,n – dimethyl formamide on interdigitated electrodes(ides) with a separation between the fingers as 5µm. firstly the electrodes can be batch fabricated using conventional lithography techniques hence making it low cost. also the finger separation of 5µm allows better electrical transport properties of the carbon nanotubes between the electrodes. the ease of preparation of these sensors makes it highly favourable for commercial use. the sensor has been tested for several cycles and has shown high reversibility and repeatability which makes it reusable, another contributing factor to its low cost. though as stated previously carbon nanotubes based sensors have been used for methane detection but most of these were limited to fundamental studies. for the first time, to the best of our knowledge, we have successfully integrated a carbon nanotube based methane sensor with a signal conditioning circuitry, microcontroller, and primary and secondary alarm systems into a complete prototype module making it portable and easily mountable. although the on board buzzer and lcd display form the primary alarm system, users can be alerted only when they are within the vicinity of the system. however with the use of gsm module, even in the absence of the user, they can still be notified via sms to make them aware of the gas leakage and avert any accidents. also large power relays can be used to trip the ac mains off in case gas leakage is detected. this way even if the user is unaware of the gas leakage, it greatly reduces the chances of any accident due to sparks by turning on any switch. this feature along with alerting the user via buzzers, lcd and sms messages greatly reduces chances of any accidents. the estimated cost of the base module consisting of the sensor, microcontroller and the primary alarm system is around 1700 inr whereas inclusion of the gsm module will slightly increase the cost to 2500 inr which makes it quite affordable. we have successfully made a prototype of the room temperature methane sensing module from the concept and anticipate to see the product form of the prototype in the near future.