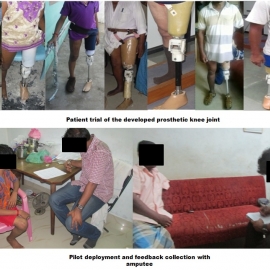 Significant progress was made with advanced prosthetic devices such as pneumatic and hydraulic swing-phase control units led to achieve the highly functional mobility; however, the bulkier and weight of the prosthesis neglect the option for using it in children. it was also found that more expensive, maintenance in the knee joints and the distance travelled to the prosthetic repair centers caused the amputee to think about the affordability of the knee joint. further, there are many amputees in india, who are not able to afford the prosthetic leg due to its cost. in order to overcome the above said limitations, the passive polymeric prosthetic knee joint was developed, which consist of a top part, bottom part, small link and large link pivoted as a multi body system to achieve the flexion-extension of the knee joint. the top face of the knee joint was provided with adapter coupled firmly to transfer the load from the stump of amputee via socket. a compression spring along with cylindrical rod was positioned in the interior of the bottom part, which provides the engaging and disengaging of the top and bottom part. two extension springs were coupled to the top and bottom part through supported beam in the top and bottom part for the flexion and extension of the knee joint. the developed knee joint has the significant advantages such as light weight, inexpensive, high stability, compatible knee adapter, extension bias, integrated form of polycentric and single axis knee joint, extended service life, reduced environmental degradation, compression spring for single axis access and single axis pin for connecting the links over conventional knee joint was developed. moreover, the amputee walking simulator was also designed and developed for testing the polycentric knee joint before the patient trial.