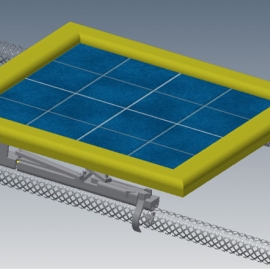 This paper describes a design of mechanism for robot of solar panel cleaning process. cleaning process is requires the robot to be able to travel on the solar panel module in specific area. the movement of the robot is due to inch-worm mechanism with the help of two ropes. our proposed design having two body with two grippers placed at either end of its body, the inchworm's mode of locomotion is to decisively attach the rear portion of its body on a rope via its gripper, extending the remainder of its body forward, attaching it on the rope and bringing the rear part of its body to meet the forward part. this design has two servos. one servo is responsible for the closing and opening of first gripper as well as linear motion on the rope. second one is responsible for closing and opening of the second gripper. both grippers provides latching and unlatching of robot on the rope. in this way, the inchworm always has at least one portion of its body firmly latched on the rope. robot has its own solar module. that converts solar energy to electrical energy and feed to robot. robot has its own solar module. that converts solar energy to electrical energy. that mechanism will be very useful for surface cleaning robot. keywords: inch-worm mechanism, solar panel, cleaning robot, latching, rope