Hybrid Classifier For Marine Vessel Based On Propulsion 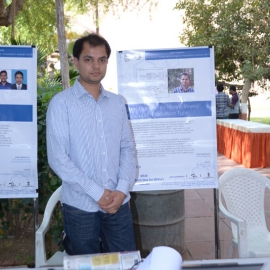 The suggested hybrid classifier is based upon spectral, cepstral, chaotic and fractal features. the ship radiated acoustic signal contains tonal (line spectrum) as well as broadband spectrum. position of highest tonal frequency, number of lines in line spectrum above suitably chosen threshold, bandwidth of above line spectrum, spectral centroid, spectral roll-off are the spectral features found useful. convolution in time domain is equivalent to addition in cepstral domain. therefore cepstral features are found to be effective for hostile underwater channel. cepstrum and mel-cepstrum are the useful cepstral features. further it has been found that non-linear irregularities are present in ship radiated signal and their measure provides good features for classification. largest lyapunov exponent and fractal dimensions are also used for classification. though fractal and chaotic features are traditionally studied for classifying ships based upon their size but we found that they are also useful in separation propulsion based ships. further the classification is improved by combining the results of several classifiers. two methods have been tried for combining the results of several classifier algorithms; first the results nn, knn, svm and naive based classifier are combined using ann to reach at final decision. this classifier is termed as type i. and in second method the results of all these classifiers (nn,knn, ann, svm, naive) are pooled together to reach at final decision and is termed as type ii. for testing the design the simulated data has been used. every classifier requires training therefore 80% of total database has been used for training and the remaining 20% has been used to evaluate the suggested hybrid classifier. it became clear from the simulations that suggested classifier performs reliably even under severe conditions.