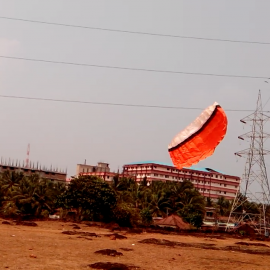 Electricity is something that people cannot live without in the modern day. without it, life will be so much difficult and slow. we have been using fossil fuel to produce electricity but we have also seen the consequences- the pollution! recently india’s capital has seen its most polluted day! people need to learn how to value electricity and learn how to produce it from renewable sources. however, current renewable technologies have limitations and there is no significant research in the field of wind energy especially in india. we have to seek for a innovation which provides- more from less for many! wind doesn’t blow all the time in most places. wind at high altitudes is almost constant and hence, is a vast energy resource than surface winds. since high altitudes have fast and more consistent wind blowing, it can generate more power compared to traditional wind turbines. the high altitude wind power extracts 100 times greater kinetic energy. it is not easy to reach more than 100m using traditional wind turbines, so we have tried to trap this tremendous high altitude wind power by an every child’s plaything-kite. this is not an ordinary, triangle shaped kite but called as power kite. in ancient days kites were used to pull the carts. so if it can pull a cart, why not use this technique to rotate the rotor of the generator? further, energy harvesting is possible even at inaccessible locations such as offshore and elevated areas but at lesser installation costs. kite energy is radical innovation in wind energy generation. the technology exploits the powerful high altitude wind of the troposphere and converts it into electricity by means of power kites. two high-tech cable link the kite to the generator placed on the ground where kite movement is controlled by the control system and electrical power is generated. by using these kites, power output increases, initial cost reduces and can reach very high altitudes without any difficulty. given these merits, the kite energy project is uniquely implemented to contribute to the overall growth of our nation. initially, the kite is made to fly on the ground. the kite is maneuvered in such a way that it gives maximum power. from flying kite, we came to know that the power is maximum, when the kite in maneuvered in infinity-like shape in the sky. this maneuvering is done by the small remote controlled motors in the ground which controls two breaking lines of the kite. the top two lines also called as power lines are connected to a single wheel at the ground which is connected to the generator through a chain drive. the function of the chain drive is to increase the low speed into high rpm. power generation works in two phases,first power phase- the thread which was wound on the power wheel unwinds as the kite goes high and high. the speed of the main power wheel is reduced so as to unwind the thread as slow as possible but also giving high rpm at the generator side. the maneuvering of the kite is done by controlling the bottom two threads of the kite called as the breaking lines. once the thread in the power wheel is fully unwound, recovery phase starts. second, recovery phase-at this point by controlling the kite, the kite is made to stand at 12 o-clock position. at this position, the air just passes over the kite because wind is not acting normally at it. the kite now starts to stall, giving no pulling force. the motors wind back the kite at lower energy. at a particular height the kite is again controlled to start the power phase. these two cycles repeat. the camera fitted into the kite records the footage of the land which can also be used for security purposes. this technology is currently not available in india! so this can be the "wind of change". and also, this project has won the title of “project of the year” award by karnataka state council for science and technology conducted by indian institute of science(iisc), bengaluru.