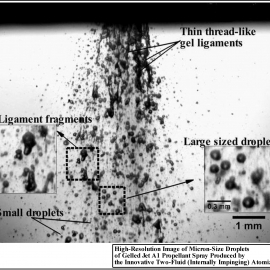 The innovation is in the form of a two-fluid atomizer, a device that transforms bulk liquid into millions of micron-size droplets. this innovation is alternatively described as “internally impinging atomizer” to reflect its basic working principle, which uses multiple microjets of air at low to moderate pressure within the atomizer body. the two-fluid atomizer comprises an inner tube to provide a passage to the fluid to be atomized and an outer tube surrounding the inner tube forms a plenum for the atomizing gas. the two-fluid atomizer further comprises a nozzle head coupled to a lower end of the inner tube. the nozzle head includes plurality of small aerator holes proximate to a discharge orifice. the plurality of aerator holes allows multiple high momentum atomizing gas jets to enter a mixing chamber. the innovation generally concerns the field of enhancing the atomization quality of highly viscous non-newtonian fluids by utilizing only a small amount of atomizing air. this has been made possible with the introduction of high momentum atomizing air in a cross flow arrangement into the incoming viscous liquid at the conical section just upstream of exit orifice. high shear rates induced in the conical section and at the narrow passage of cross flow of air are beneficial for shear thinning non-newtonian fluids to reduce the apparent viscosity within the atomizer itself. this facilitates easy disintegration of viscous fluid in the atomizer, before issuing out as a mixture from exit orifice. since the mixture is ejected from a single orifice, further breakup occurs near the nozzle exit due to the high shearing force of co-flowing air stream. as a result, fine spray is produced at a relatively small amount of air and supply pressure. in addition, due to the short residence time in a narrow channel, the disintegrated viscous fluid is less susceptible to re-combine prior to the nozzle exit. short mixing zone, smaller residence time for the two–phase flow, and a simple and compact geometry makes this atomizer a novel design for atomizing highly viscous non-newtonian fluids at low gas to liquid mass ratio including, but not necessarily restricted to, gel propellants, slurry fuels, polymeric viscoelastic fluids, and biofuels. furthermore, laboratory tests show that the same design is also able to produce a spray of acceptable quality in case of low-viscosity newtonian fluids. thus, a versatile atomizer design is disclosed that can be used in many situations of commercial importance. it could be used in many industrial applications, for example in pharmaceutical industry, chemical processing industry, foodstuff industry, steel industry, waste processing industry, and rocket propulsion. the innovative atomizer is especially suitable for atomization of fuel formulations that are prepared to improve safety in storage and handling stages of propellant life cycle and replace less versatile solid propellants. these newer fuel formulations also tend to reduce environmental pollution and improve overall efficiency of propulsion engines. they are however highly viscous and difficult to atomize. such fuels include gelled fuels, slurry fuels, metalized gelled and slurry fuels, and blends of fuels involving green fuels (such as bio-fuels). a prototype of the device has been fabricated and extensively tested for suitability in aerospace propulsion application. it is available for inspection. the working principles of this prototype have been studied empirically and by means of computer simulations. these studies have provided information on the characteristics of this device and enabled incorporation of improvements.