Flexicast: A Breathable, Washable And Customized Cast For Immobilization Of Fractured Limb 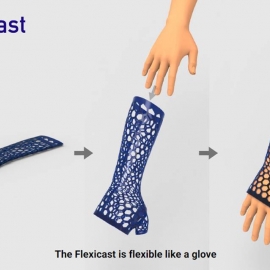 Orthopaedic fractures are very common; globally fracture rate is 170 million fractures per year and approx. 30 million of them occur in india per year. the flexicast innovation relates to the field of orthopaedic casting system for immobilizing and supporting fractured body part. typically, most broken bones of limbs, such as arms and legs and minor skeletal injuries such as sprains, joint dislocations are immobilized with cast for support during the healing process. the function of a cast is to immobilize an injured bone or joint unitil it gain enough strength for normal movements. the cast immobilizes the limb to allow the bone fracture to mend itself in proper position. the cast most often used consists of layers of fabric and cotton padding tape wrapped around the limb. traditional casts are heavy, uncomfortable and subject to degradation by water and sweat. this often makes bathing and other activities difficult and /or impossible for the wearer. further difficulties may be experienced in the ability for casts in adjusting to accommodate for swelling. the skin underneath the cast is also subject to irritation, skin breakdown and pressure points that can lead to infections that can threaten the limb. the technology used in the casting process has changed little in last 100 years. two casting methods used commonly are plaster of paris cast (pop) and fiberglass casts. several problems observed in traditional casts, such as pop and fiberglass casts are non-breathable which leads to poor skin hygiene and skin irritation. traditional casts are non-washable leads to stinky smell and soiled cast. additionally, any moisture that gets under the cast wets the fabric and cotton padding tape within the plaster cast. also the fabric and cotton padding tape can get wet from bathing, from perspiration and other such causes. the wet fabric and cotton padding tape causes skin irritation and maceration after a short time. mildew and bacteria thrive in such an environment and creates an unpleasant odour. these casts are heavy and bulky which are not comfortable to patient and also it puts stress on joints which may lead severe injury in case of paediatric patient. poor visibility to skin results into complications of wounds. flexicast overcomes the problems occurring due to traditional orthopaedic casts system. flexicast is breathable, washable and lightweight. it is customisable, easy to apply and remove. it allows seeing through the skin to keep a gaze for swelling under the covered skin part. in addition it provides a casting system which eliminates the use of padding in it and which does not require water for hardening or curing process. the cast assembly/system comprises components like customizable cast, hardening material and cutting tool. the customizable cast is made up from flexible material such as silicon rubber in different 4-5 sizes according to anthropometric data (same as different size of gloves). the cast has different small geometry’s inspired from nature to give strongest structure. cast shape may vary according to site and purpose of application such as short arm cast, full arm cast, barrel cast etc. for both limbs. on choosing appropriate size cast will take shape according to contours of patient’s limb. the infusion material used in the present innovation is supplied with flexicast and able to be transformed into hard material within 10 minutes after the infusion. infusion is done in reduced fracture position and maintained for 15 minutes after infusion. flexicast prevents infection by maintaining skin hygiene. it is also radiolucent. cost of flexicast is comparable to fiberglass cast. so flexicast provides a cost effective casting system which comprises all the above technical advantages.