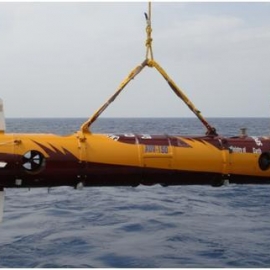 Oceans are the central sources of energy and chemical balance that sustains the mankind with its deposit if invaluable hydrocarbons and moderation of weather condition. all these necessitate human-being to investigate oceans and develop ways to explore it further. apart from these ocean activities are relative to tropical storm, tsunami and earthquake. to minimize these sabotages caused by ocean, they are needed to be monitored continuously. autonomous underwater vehicles ( auv) can perform various tasks ranging from sea floor surveying, inspection and maintenance, rescue and surveillance to name a few. customized autonomous underwater vehicles are extensively used for surveying and maintenance of deep water oil pipelines and nuclear power plants where the operating conditions are hazardous for human. extensive research is being carried out globally on autonomous underwater vehicles mainly focusing on control methodologies that allow these systems to work in the unstructured and unpredictable environments for specific applications. the difficulty of controlling the autonomous underwater vehicles lies in its highly non-linear and coupled dynamics, parametric uncertainty, modeling errors, payload variation based on different applications and environmental hazards which make the control task challenging. the limited on-board power also makes the mission of the underwater vehicles restricted. limited on-board energy resources of autonomous underwater vehicles (auvs) demand for the design of appropriate controllers to achieve optimal energy consumption while tracking a commanded path. the unstructured oceanic environment also calls for a robust control law capable of handling parametric uncertainties and environmental disturbances. though variable structure control has proved to be an effective strategy for underwater operations, it provides no scope for energy optimization. for an energy critical mission, it is desirable to minimize the net control effort even at the cost of compromising accuracy within a reasonable bound. with this aspect in mind, a two stage energy efficient robust control methodology has been presented here based on the appropriate switching surface design pertaining to the sliding mode control and the solution of euler-lagrange equation for energy optimization in relevance to the trajectory tracking of autonomous underwater robots within acceptable range of tracking error. the robust controller compensates the uncertainties and disturbances present in the system within some bounds and provide the best possible initial guess for the solution of the optimal controller. the hybrid controller christened as sub optimal sliding mode controller (sosmc) is designed to simultaneously address the afore-mentioned issues of robustness and energy efficiency of the system. the real parameters of an autonomous underwater vehicle (auv) developed in the laboratory for 150m depth of operation at sea, have been chosen for implementation of the sub-optimal robust controller in simulated environment. the system has been driven through various trajectories (lawn mower and composite 3 dimensional helical trajectories). an improved energy efficiency of 14.70% has been noted for the proposed novel control law with respect to conventional sliding mode control while tracking a (25m*15m) lawn mower path at the depth of 50m below sea-surface with forward velocity of 0.8m/s. for a (30m*20m) helical trajectory, 25.39% improvement of energy efficiency of has been noted for sosmc with respect to conventional sliding mode control while tracking with forward velocity of 1.3m/s. the improved energy efficiency of the controller results in improved battery life of the system thus making it more cost effective. this also helps with extending the mission life of autonomous underwater vehicles in hazardous situations without the need for human intervention. performance studies also reveal the with the provision of tuning the controller parameters according to the priority of the situation, the novel controller provides scope for energy critical operation with marginal compromise on tracking accuracy.