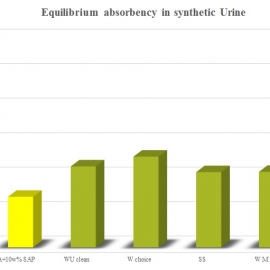 Women constitutes almost 50% of world’s population, out of which only half of the women are using the feminine hygiene products like sanitary napkins due to various reasons. some of these reasons includes health concerns associated with their long term use and also their high cost and thus unable to afford it on a regular basis. the average women use approximately 15,000 napkins over the course of her lifetime. most of the sanitary napkins that are available market are mostly made up of wood pulp fibers, rayon fibers, dyes for giving color, chemicals for giving fragrance, bleaching with chlorinated compounds to make it appear white and the most important one is to increase the absorbency of the sanitary pad people will add the superabsorbent materials to them.. now a days women are suffering from lot of problems because the continuous use of sanitary napkins which are containing these harmful chemicals. they are causing diseases like cervical cancer, skin allergies, toxic shock syndrome (tss) etc. mostly all the sanitary napkins available in the market consist of micro level cellulose derived fibers. the absorbency of these fibers are not adequate for the usage, so they started using of superabsorbent polymers (sap) to increase the absorbency of the napkins but of course, overlooked the health effects. sap’s are materials that have the ability to absorb and retain large volumes of water and aqueous solutions relative to their own mass. one of our main idea is to decrease the super absorbent polymer content without compromising on the absorbency by replacing the microfiber matrix with the nanofiber based matrix due to different advantages of nanofibers. electrospinning is used to produce the nanofiber matrix because of advantages like flexible morphology and tunable porosity. nanofiber matrix consisting of pure cellulose acetate and cellulose acetate with different wt % of sodium poly acrylate (super absorbent polymer, sap) were produced by optimizing the parameters for electrospinning. for absorbency test purposes 3 widely used sorbents like distilled water, 0.9% saline and synthetic urine solutions selected and tested for different time intervals for prepared nanofiber matrix and few of the commercial products which are containing of microfiber matrix. the pure cellulose acetate based nanofiber matrix showed the higher absorbency, interestingly even higher than cellulose acetate and sap based nanofiber matrix. then we tested the residue amount of fibers using mechanical shaker for 24h it showed that nanofiber matrix s having almost nil residue. for testing the mechanical properties tensile tests were performed. we observe the young’s modulus of nanofiber matrix was significantly higher than commercial samples. based on the above results, it was confirmed that use of super absorbent polymers can be eliminated by considering electrospun nanofibers based matrix as female hygiene products which may potentially address the related health concerns as well.