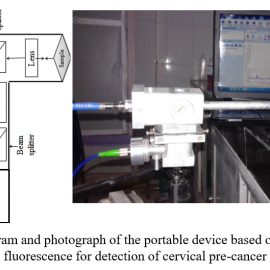 Worldwide cancer of the cervix is the second most common cancer in women, with about 5,00,000 new cases and 2,50,000 deaths each year [who report-2012]. out of the total number of women dying of cervical cancer globally, 26.4% are from india. conventional screening techniques for cervical cancer like pap smear, colposcopy and biopsy are time consuming, expensive and limited in specificity or sensitivity. these tests are subjective, with accuracies varying as per the skills of the examiner and the low sensitivity or specificity rates means that many lesions are missed or overcalled. this makes it imperative to design an objective test which does not depend on the skills of the operator and which can detect precancers in a minimally invasive way under clinical conditions so that disease can be identified with higher sensitivity and specificity, and unnecessarily missing or overcalled samples can be sidestepped. fluorescence spectroscopy is a sensitive technique and can probe subtle biochemical changes that take place during early stages of disease progression. this may be monitored through the changes that occur in the fluorophore emission. this technique has been found to be effective in early tumor diagnosis. however, in turbid media like tissues, the effects of scattering and absorption modulate the fluorescence information and hence we need to obtain the intrinsic fluorescence which is the native tissue fluorescence, free from the effects of absorption and scattering. to extract intrinsic fluorescence we normalized polarized fluorescence spectra by the polarized elastic scattering spectra. based on this fact we have designed, fabricated and automated a portable device to obtain the intrinsic fluorescence from human cervical tissue samples by measuring polarized fluorescence and polarized elastic scattering signals. this device consists of a laser diode (405 nm) and white light source (xe-lamp) to measure the polarized fluorescence and the polarized elastic scattering spectra respectively. vertical polarized light falls on the sample and co- and cross-polarized fluorescence and elastic scattering spectrum are measured by automated rotation of the analyzer. signal is subsequently collected through an optical fiber and directed towards miniature spectrometer. all data are collected at 180 degree angle (backscattering mode) with respect to incident polarized light [as shown in attached image]. the sensitivity and the specificity for discrimination of pre-cancerous (cin i, ii and iii) (cin; cervical intraepithelial neoplasia) samples from normal samples are found to be 100% with confidence interval of 99%. the device, built in-house, has been installed in the gsvm medical college kanpur, tested on cervix of whole uterus immediately after hysterectomy and shows promise as a useful tool for detection of cervical pre-cancer in clinic environment. this portable device is cost effective, fast, accurate, minimally invasive, and has the potential to become a part of the regular screening tools for in-vivo detection of cervical cancer in the clinic. further, the portability and easy implementation of the device can result in making the device affordable and accessible to rural and remote areas.