Development Of A Novel, Non-biological Pyrogen/microcellular Components Detection Technique For Purification And Depyrogenation Of Water. 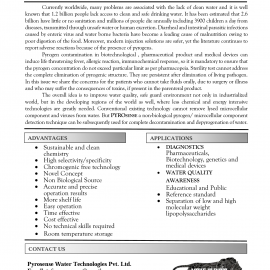 The advent of the hypodermic needle provided a new route to administer drugs. however, the early parenteral drugs were crude and unsafe. modern injection solutions are much safer, yet the literature continues to report adverse reactions. here we address the concerns for the patient who are unable to take-up fluids orally, pertaining to a certain kind of surgery or illness. these patients could easily succumb to an unwanted toxins substance known to cause fever, if present in the parenteral product. to tackle this problem, we have developed a non-biological pyrogen detection technique which can be subsequently used for depyrogenation of water. pyrogens are exotoxin or endotoxin, which are basically lipopolysaccharide, polysaccharide or proteins of the bacterial origin. these pyretic agents are released due bacterial lysis in water whose molecular mass ranges 10 kda to 1000 kda due to which it becomes infeasible to identify and separate these agents from water. humans, when exposed to very small quantity of pyrogen, often develop symptoms whose results might be fatal. the technology of pyrosensetm is based on oxidation of aldehyde moiety or pyrone ring present in pyrogen. the oxidation process converts these moieties in carboxylic group which further gets converted into polyols. fluorescence spectroscopy (410 nm) can be used for the quantification of polyols. further, polyols have the property to form agglomerates upon getting charged which can be achieved by stirring or radiation. polyols have a tendency to form complexes with poly-valent transition metals which results into precipitation. the usage of poly-valent transition metal is advantageous due, its high affinity towards polyols and carboxylic group, thus accomplishing an efficient process. the agglomerates or precipitates formed can be easily separated-out via filtration or distillation. pyrosensetm can oxidise a spectrum microcellular components including viruses, nucleic acid and proteins. pyrosensetm, is based on green chemistry which uses non-biological reagent which devoid of any storage requirement. such technologies are state-of-art for the medical and commercial market, thus pyrosensetm technology would prove to have a huge potential for upcoming water purification and depyrogenation systems. process evaluation lies in the adoptability and adaptability of pyrosensetm technology into existing methods is feasible. pyrosensetm technology can be considered as a disruptive innovation, which has the potential to change the whole framework of a market, possibly completely eliminating other competing technologies. the technical evaluation pyrosensetm technology has the potential to achieve better results than existing technology on a large scale which can be readily used for the detection of pyrogen in water samples. this novel technique can be merged with the existing commercial techniques like ultrafiltration and distillation for depyrogenation of water. the changes to the existing infrastructure would be limited, without any additional permission or other regulatory cost requirements. this technique is economically viable and operational and maintenance costs, will not differ much from the existing cost. however, the benefits of the technique will cover the full proportion of costs that consumers will be responsible for paying. pyrogen detection is of utmost importance in pharmaceutical industry, laboratories and health care institutions. various existing techniques for pyrogen detection includes components of biological origin. the technique does not consist of any biological source and supports clean and green chemistry. moreover, it’s cost effective, long shelf life, provides high sensitivity and accuracy with no or minimal storage conditions. this technique also supports green and clean chemistry. the reprocessing of generated waste to the initial raw materials is feasible. moreover the reagents used in the process are in parts per billion and parts per million levels and which have no adverse effect of the environment. thus the technology will be readily accepted by the regulatory authorities.