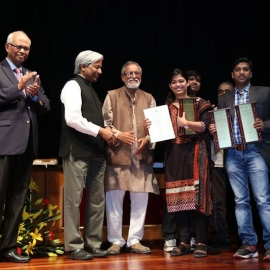 Introduction: osteosarcoma, fibrosarcoma and chondrosarcoma have been difficult to treat by conventional methods of external irradiation, but newly developed extracorporeal irradiation therapy (ecrt) and reimplantation is now an established technique for limb salvage surgery of malignant bone tumour. ecrt is a biological reconstruction method with several advantages including no risk of immunological reaction or diseases transmission, cost-effective, absence of heavy implants, no need for subsequent surgeries in growing-age patients, and others. implanted bone segment is a “custom fit” being the patient own bone. it allowed effective reattachment of tendons and produce a lasting re-construction. while several studies have focused on clinical outcome of the procedure, structural and morphological changes in human bone under heavy dose of radiation (50 gy) are not well established. we examine biomechanical property in resected bone for patients with malignant bone tumours (osteosarcomas and ewing’s sarcoma) pre and post ecrt, since disease is the corruption of mechanics. such characterisation of structural and mechanical properties for patients under ecrt can help clinicians in selection of suitable external support mechanism (such as locking plates, intramedullary nails, simple k wires, or pins) during reimplantation, and in deciding post-operative care. material and methods: we have so far examined 3 patients with ewing’s sarcoma undergoing ecrt and reimplantation at all india institute for medical sciences (aiims), and subsequent biomechanical study being performed at indian institute of technology delhi (iit-delhi). there were two male and one female patient, with mean age of 16 years. the femur, pelvis and humerus are the concern locations. from the resected bone sample of healthy bone section was obtained pre and post ecrt and delivered in physiologically saline solution to iit delhi. the excised samples were cleared of bone marrow and excess of soft tissue using jet of deionised water. small cubes were cut using diamond cutter ( isomet low speed precision cutter, buehlar ) under constant lubrication with deionised water and kept in desiccators for an hour the sample is then examined under a microscope and subsequently embedded in epoxy (epoxicure, buehler) and polished. sample is rinsed copiously with di water followed by ultrasonication in di water. mechanical testing via nano-indentator (unat-m, asmec) and surface examination under atomic force microscopy in contact mode is examined. quasi static nano-indentation analysis is carried out using berkovich diamond tip with maximum indentation load of force of 25mn with a hold period of 10 sec (to minimise the effect of plasticity on unloading cycle) and indent spacing of 50µm to avoid overlap of plastic zone. for the diamond indentor e = 1140gpa, v = 0.07, v for the bone is assumed to be 0.3 with isotropic and elasto–plastic behaviour . results: figure 1 shows details for patient 1 (male, 14 years) suffering from ewing’s sarcoma in humerus section. microscopic examination of pre and post radiation sample revealed structural changes via loss of living cells called osteocytes present in lacunae, since osteocytes are responsible for controlling the remodelling of periosteal bone by regulating parathyroid receptor signaling. average indentation curve obtained by series of indenter at the lamellas of secondary osteon revealed significant loss of mechanical property as a result of high-dose radiation. for patient 1, average elastic modulus reduced from 13.5 gpa to 6.8 gpa while hardness changes from 0.46 gpa to 0.37 gpa.