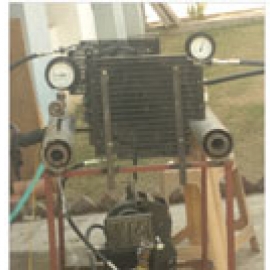 The present invention is about an air cooling system for automobile cabin using waste heat from engine exhaust. initially cabin cooling of truck has been considered for various reasons. the system can also be used in other automobiles as well as in other applications where waste heat is available. road transport is an important mode of transport for goods over large distances. in summer in some parts of india the temperatures are in the range of 45 to 50 oc. in such conditions the temperature inside the cabin can even be more than 50oc. for automobile air conditioning normally vapour compression refrigeration cycle is used which runs on engine power and consumes around 10% of the total power produced. in case of automobiles large amount of heat of input around 60 % is going as waste. a part of this can be effectively used to develop a heat generated cooling system. the present work is design and development of a cooling system for a transport truck cabin using waste heat of exhaust. it is an adsorption refrigeration system which is powered by the engine exhaust heat so it does not affect the fuel consumption of the engine. the development of the proposed system is in progress. initially a model of the system has been developed and tasted successfully in the laboratory of our college. the results were encouraging and will be presented in the final report.