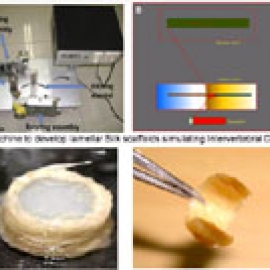 A novel design of silk-based scaffold is developed using a custom-made winding machine using stepper motors of old tape recorders. the silk winding machine constitutes of two assemblies which are placed diagonally to each other and both of them are driven by two dc motors having variable speed of 0-40 rpm respectively. the rotating assembly is used to maintain the angle of silk fiber winding containing a stainless steel rod which is used as the rotating mandrel and the silk hydrogel is mounted on it. the silk fiber bobbin is mounted on a spindle placed on one end of the machine. the silk fiber from this bobbin passes through the key hole in the sliding block and winds the hydrogel mounted on the rotating mandrel. the sliding assembly has a sliding block which activates a pair of micro-switches alternatively. the micro-switches control the direction of rotation of the motor which in turn controls the direction of winding in forward and reverse direction. the scaffolds having criss-cross orientation of silk fibers were cultured with human chondrocytes upto 4 weeks. the novel bioimmetic scaffold formed a morphological framework guiding the desired silk fiber orientation which would facilitate the cells to attach, grow, differentiate from flat to rounded cells, indicating cartilaginous re-differentiation and deposit extracellular matrix along the fiber direction thus contributing to the overall mechanical behaviour of the tissue. hence this novel silk based fibrous scaffold with the layered architecture may simulate precise architecture, challenging biomechanical functionality and typical microenvironment of intervertebral disc.