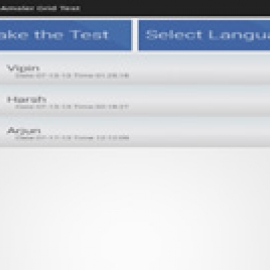 Using the technological advancements for a good cause is always a motivating effort. age related macular degeneration has been affecting over 25 millions of people worldwide and resulting in loss of partial vision with no consistent means of diagnosing its occurrence on time. the loss in vision is a result of the damage caused to the central part of the retina. in the traditional approach towards diagnosis of amd, amsler grid test has been the most profound one. the test included focusing in the center of a 20 by 20 grid on a paper and marking the distorted area via pen. but, for such a practices many setbacks such as difficulty in maintaining database of results, necessity of having a supervisor etc. were involved. here comes into picture the idea of bringing the concept of pen and paper on a mobile platform. android app for taking amsler grid test removes all such setbacks thereby serving as the most interactive and efficient medium of diagnosing the disease. the most highlighting features of the app include ability to store database of the results, functionality of sharing it with the doctor instantly or emailing it, enabling the user to draw distinguished patterns for different types of distorted areas and providing audio and text assistance throughout the app.