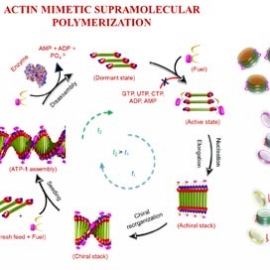 The need of supramolecular systems with increased complexity and structural control is growing in the direction of intriguing functions similar to their biological analogues like dna and cells. the question, “how far can we push self-assembly?” is recognized as one of the big-challenges in supramolecular material science.in this work we have described a synthetic organic molecule, oligophenylenevinylene functionalized with dipicolyl ethylene diamine (opvdpa), stacking in a helical sense on electrostatic interaction with a biological cue, atp, giving well-defined supramolecular polymers. this gives a generalized strategy for realization of kinetically controlled living supramolecular polymerization, which is the next level of complexity to be addressed in the field of molecular self-assembly.this process is very close to events occurring in nature that notably help a cell to maintain its shape, i.e. actin, which undergoes atp driven temporal polymerization and dynamic instability. our study has come closest in synthetically mimicking this natural process. this study is an important next step in the development of functional life-like materials and systems. our synthetic system, with which we have achieved controlled supramolecular polymerization, will also have opportunities in supramolecular electronics (a sub area of research that leads into organic electronics). a step further is organic electronic device in interface with biological live feed. such a system would be highly efficient and uniquely adaptive in reporting live biological changes in a body. and through temporally coupled networks of aggregating systems we can go a step further of creating biologically interactive synthetic networks. the exciting avenues opened up by this research give us the opportunity to create thrilling biomimetic systems which will give rise to biological functions. this work has been published as: biomimetic temporal self-assembly via fuel-drivencontrolled supramolecular polymerization.mishra, a.,korlepara, d. b., kumar, m., jain, a.,jonnalagadda, n.,bejagam, k. k., balasubramanian, s.& george, s. j. nat. comm.9, 1295 (2018).