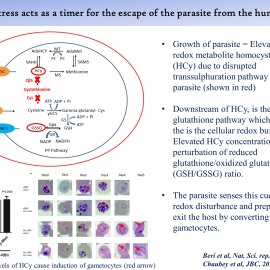 Plasmodium is the causative agent of malaria and for the last several decades malaria has caused a huge socio-economic burden on india. the malaria parasites have a complex life cycle with two important forms in the human host; the asexual forms that cause the clinical manifestations of the disease and the sexual forms called the gametocytes which constitute only ~ 2 % of the total parasite load. gametocytes are the transmissible forms leading to spread of the parasite from the diseased host to a healthy host via the vector and thus, are absolutely essential for the parasite’s propagation. due to technical difficulties in studying gametocytes, very few research groups investigate this aspect of malaria. even today, the triggers of gametocytogenesis are ill understood. until now, stress factors like antimalarial drugs, red blood cell lysis and host immune response had been linked to commitment. given the essentiality of this stage for parasite survival and propagation, we ventured into investigating the molecular triggers of sexual commitment in p. falciparum. recent studies from our group have demonstrated that redox stress created by the parasite’s own growth is responsible for the commitment to gametocytes. our study, for the first time, shows a physiological metabolite homocysteine linked to gametocytogenesis in in vitro plasmodium falciparum cultures as well as in the mouse model of cerebral malaria. the study used state-of-the art techniques and dissected the biological pathway responsible for the accumulation and efflux of the metabolite in infected red blood cells and patient’s plasma. the parasite lacks two critical enzymes (cytstathonine beta synthase and cystathionine gamme lyase) which are needed to convert homocysteine to cysteine. the truncation of this pathway leads to build up of homocysteine in the parasite which further effluxes it out to the infected red blood cell and ultimately the culture medium/ plasma of human patients. thus, the growth of the parasite leads to accretion of the metabolite. the parasite senses elevated levels of homocysteine and takes it as a cue to form gametocytes and escape from the diseased host. our study reveals an autocrine switch which facilitates the escape of the parasite and ensures its transmission and species survival. many antioxidant molecules have been linked to protection against severe malaria. nutritional pharmacology effects have been appreciated in mouse model of malaria but its effect in humans is not well documented. also, due to lack of understanding of their mechanism and off-shoot effects, their commercialization has not been possible. clearly, redox plays an essential role in parasite survival and transmission, thus, providing researchers an opportunity to design therapeutic tools against it. we propose the application of our finding to develop transmission blocking molecules. through our study, we now understand the biology behind commitment to sexual stage in malaria. elevated levels of homocysteine lead to gametocytogenesis and any molecule that can lower the circulating levels of homocysteine in the malaria patient may halt the process of gametocytogenesis. together with drugs that combat asexual stages, this would ensure complete elimination of the parasite from the diseased host and break the cycle of transmission. thus, we aim to develop a therapeutic that would disable the parasite to convert to its transmissible form. this would not only help cure the patient of the symptoms associated with clinical malaria, but ensure that the patient does not become a reservoir of parasites for future transmission. this would have a huge impact on reducing malaria transmission and help us advance towards the greater goal of malaria eradication.