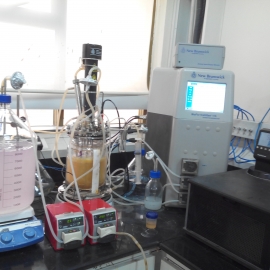 Carbon dioxide remains one of the top polluter of the atmosphere and conversion of carbon dioxide into chemicals is thermodynamically unfavourable. however microbial systems can efficiently convert carbon dioxide into various chemicals. in our process, we have developed a novel two stage fermentation system for the conversion of carbon dioxide gas into lipids for biodiesel and high value nutraceuticals like omega-3 fatty acids and carotenoids at exceptionally high production rate as compared to conventional phototrophic algae derived fixation of carbon dioxide. omega-3 fatty acids like docosahexaenoic acid (dha) have wide range of pharmaceuticals and nutraceutical application. thus by co-producing high value products with biodiesel, it can cross subsidize the production cost associated with biodiesel and making it commercially viable fuel apart from establishing a sustainable source of omega-3 fatty acids which is currently being produced from marine fish. in this process, first stage fermentation is carried out by anaerobic bacteria and converting around 0.5 kg/l/d co2 into 0.2 kg/l/d acetate, which later fed into second stage fermentation system as carbon source. second stage fermentation is carried out by an in-house protist, which assimilates acetate into 0.15 kg/l/d biomass with 0.1 kg/l/d lipid having 0.04 kg/l/d docosahexaenoic acid. rest of the lipid can be used as feedstock for biodiesel production. therefore a fermentation system of 1 million litre capacity has the potential to sequester approximately 0.2 million metric ton co2 per annum from any source and assimilating into approximately 0.15 million metric ton per annum of protist biomass producing 0.06 million metric ton lipids suitable for biodiesel production and 0.04 million metric ton docosahexaenoic acid. this process can provide a sustainable and integrated platform for (i) sequestration of carbon dioxide gas from any industrial source thus mitigating carbon dioxide emission (ii) producing biomass rich in lipids for biodiesel and (iii) alternative of fish oil for docosahexaenoic acid production thus reducing the over fishing- a issue governments across the globe are dealing with (iv) producing protein rich deoiled biomass- a good source of animal feed. since this process is a close loop process so no waste is generated in this process. therefore given the use of cheapest and easiest carbon source available and producing broad range of commercially important products along with a high value co products make this process a potentially viable at industrial scale. this process is validated at 10 l bioreactor scale and currently being scaled up to pilot scale.