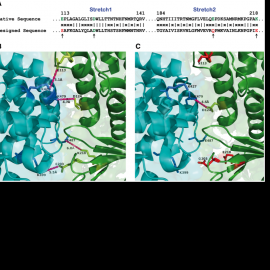 Zaire ebolavirus (ebov), one of the most pathogenic species of ebolavirus, is a significant threat to the human community being both highly infectious and lethal. according to the world health organization ebola situation report, there have been 28616 cases of ebov infection of which 11310 individuals died as of 10 june 2016 (1). several efforts have been made to design vaccines and therapeutics drugs (2). however, the success is not encouraging; primarily due to limited binding site residue information of human protein interacting with viral protein molecules. such limitations stem largely from the highly infectious nature of the virus that requires specialized personnel and biosafety level 4 laboratories to perform wet lab experiments. ebov has seven structural proteins viz. glycoprotein (gp), nucleoprotein (np), viral proteins (vp24, vp30, vp35, vp40) and the large protein (l). the ebov enters into the host cellular environment using macropinocytosis and undergoes replication and budding with the help of a viral replication complex and a viral transcription complex composed out of select structural proteins (3). ebov infection leads to uncontrolled amplification of coagulation anomalies causing fatal hemorrhagic fever in human. the interferon (ifn) proteins constitute a crucial component of the human immune system, and they protect the host from viral infections. the nuclear accumulation of ifns and their signal transduction on binding to select receptors leads to the expression of ifn-stimulated genes (isgs), which in turn act as antiviral effector molecules (4). ebov proteins, especially vp24 and vp35, antagonize the different signaling pathways involving the ifns (and isgs). in the process, ebov proteins cripple both the innate immune responses and adaptive immune responses. the host-pathogen interaction information is crucial in this case to design and deliver new therapeutics including vaccines. although critical interactions involving the vps and proteins in the ifn pathways are discovered, specific binding information between such pairs is still unknown in most cases. one of the main obstacles is the highly infectious nature of the virus. therefore, we proposed a protein interaction and protein design based computational alternative to identify critical residues crucial for the human protein-vp interactions. the computational framework makes use of an existing protein design algorithm ensuring evolutionarily and energetically favorable mutations on interface residues of a participating protein in a protein complex. the vp24-kpna5 (karyopherin alpha proteins 5) interaction is an experimentally well-studied phenomenon concerning ebov pathogenesis and is therefore chosen to establish the efficacy of the proposed method. the critical residues identified in the vp24-kpna5 interface are in excellent agreement with previously reported experimental findings. additionally, the mutations of the critical residues affected the overall stability of the complex because of a sharp decrease in both the number of hydrogen bonds and possible charge-charge interactions. therefore, we propose that the computational framework could be a useful alternative to experimental work for destabilizing interactions between the vps and human proteins responsible for ifn induction and response. the framework can be extended to identify the critical interaction residues for protein interactions between vp35-pkr, vp35-pact and vp35-tbk1, which are otherwise not experimentally determined to date (5). references: 1. w. h. organization, (2016). 2. a. p. cardile, t. k. warren, k. a. martins, r. b. reisler, s. bavari, annual review of pharmacology and toxicology 57, 329 (2017). 3. i. messaoudi, g. k. amarasinghe, c. f. basler, nature reviews microbiology 13, 663 (2015). 4. a. j. sadler, b. r. williams, nature reviews immunology 8, 559 (2008). 5. d. w. leung et al., nature structural & molecular biology 17, 165 (2010).